Soho is one of the most important areas in London for eating out. It offers a variety of eating options the likes of which you will struggle to find in many other places in the world. Whether you fancy trying a type of international cuisine that you have never sampled before, a Michelin starred tasting menu or a late-night post-clubbing feast. You will find what you are after in and amongst the busy streets of Soho. Soho sits in the very heart of London, and its streets are filled from morning 'til night with a whole cross-section of London society. A trip to London would not be complete without a wander through the streets of Soho, with a pit stop for something to eat in one of its world-class restaurants.

This page will provide an overview to the eating options in Soho. You will find advice on what to look for when you are in search of a place to eat. You will also find listings of some Soho restaurants. Each listing will provide a link to a more detailed page where you will be able to find out about the location, contact details, what to expect, and how to book each restaurant. Each restaurant has been categorised by what kind of cuisine it serves, to make it easier for you to find what you are after.

Advice on eating out in Soho 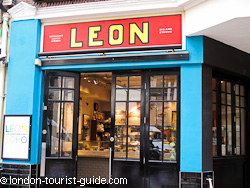 Leon take away in the heart of Soho

On arriving in Soho you would not be blamed for feeling slightly overwhelmed by the amount of variety that is on offer for eating out in the area. Each street in this relatively small district is crammed with all manner of eating options. Therefore, if you plan on doing a culinary tour of the area, it is worth doing a bit of research beforehand, so that you don't find yourself in McDonalds due to the sheer confusion of choosing between your other options.

If you are a foodie, heading to Soho in search of some of its more renowned and well-reviewed eateries, booking can be essential. There is nothing more disappointing than wandering the streets of Soho on a Friday or Saturday night, being told that each and every one of the best restaurants is fully booked. When you are looking at each of the individual review pages for the restaurants below, check the booking section for full advice on how far in advance you should be aiming to book.

If you fancy being slightly more off the cuff with your Soho dining choices, Soho's wealth of restaurants ensures that there will be somewhere that you can get your dinner if you are willing to open your mind to the options. Many of Soho's restaurants are international - Thai, Japanese, Chinese or Italian. If you don't mind waiting, you can often spot the good ones by the queue that has formed outside. Ask the staff how long the wait will be and join the queue if you think you have the stamina. For quality checks it is often worth checking their windows for stamps of approval. A restaurant with recent accolades (an award from 1998 will not do!) from the likes of Time Out or Michelin is a good clue of a restaurant's quality.

Be warned, the fickle nature of diners in Soho mean that restaurants that you may know and love often shut down. Don't be surprised if you go to eat in an old favourite only to find that it has been replaced by somewhere completely new. In recent months the likes of Las Iguanas, Circus and Bertorelli have closed down in Soho.

Italian restaurants in the area

Italian restaurants are a good option if you would like to ensure that there will be something for everybody in the group to enjoy, whilst also making sure that you don't break the bank. Besides the options listed below, you will find a great wealth of good quality independent or chain pizza and pasta restaurants around Soho.

'Modern European' seems to be one of those phrases that explain a little. However, what it does signify is the opportunity for an eclectic menu. If you are with a group of people who are likely to want a whole selection of foods, one of these places is the kind of restaurant that could solve your problems.

Soho is a suitable place to head if you have a yearning for Thai food. Whether you want a quick fix in a canteen style location or something more grand and lavish, Soho has what you are after.

Thai Tho in Soho 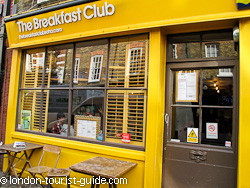 The Breakfast Club in Soho

Whether you are after a satisfying plate of burger and chips or perhaps something more high-end, you have a wealth of American eating options in Soho.

Japanese restaurants are becoming increasingly popular in Soho. They offer a wealth of variety from restaurant to restaurant. Some will serve chargrilled skewers, some big bowls of steaming noodles and other sushi and sashimi. Have a look at each of the options below to find the one that best suits you.

What else does Soho have to offer? 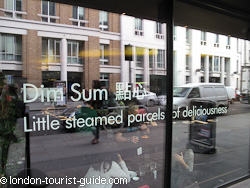 A dumpling restaurant in Soho

Soho is known throughout the world as a place that offers a whole variety of international cuisines. Want to try Beirut street food? This is the place to head (besides Beirut of course!). Fancy Chinese dumplings? You will have a whole wealth of options.

Yalla Yalla is an increasingly popular restaurant serving Beirut street food in the heart of Soho. 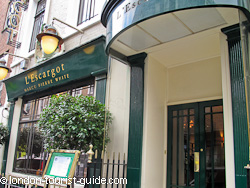 Soho is one of the areas of London with the highest concentration of Michelin starred restaurants. If you want to try out one of these places make sure you book at least a week in advance to avoid disappointment.

Hix is one of London's hottest high class restaurants, with a modern feel and attracting a trendy crowd. Come here to try twists on classic British recipes.

Yauatcha is much more than your average Asian restaurant, offering a modern space and world-class Asian cuisine.

Soho is a veritable treasure trove for foodies in search of an adventure. There is something for everybody in terms of food in this part of central London. A study of the restaurant options on Soho is like a study of London itself - you will find everything from Korean to Chinese to Italian to Kiwi to British cuisine in easy walking distance of each other. Embrace the new and the different and get stuck in to some delicious meals in the beating heart of London.