Sometimes only an Indian will do. Indian restaurants in London can be of a high standard, and they offer an opportunity to sample some of the intricate spicing and flavours that are involved in the cuisine. The Indian restaurants that can be reached from Piccadilly Circus come in a whole range of styles and sizes. Some of them are modern and look to do something new with the cuisine. Others revel in the traditional aspects of Indian food, offering you an opportunity to taste dishes that have been passed down through generations.

It is worth remembering that there is a wide variety of places to eat when you head to Piccadilly Circus. You will find restaurants in the square and the surrounding streets for a selection of tastes and budgets. Whether you fancy a fancy meal in a flashy restaurant or a quick bite with the kids, you will find a number of options. For a guide to eating out in the area, see our Guide to Restaurants in Piccadilly Circus.

What to expect from the Indian restaurants in Piccadilly Circus

Piccadilly Circus itself is not actually home to any Indian restaurants. However, in the surrounding areas, you will find a wealth of Indian eateries. If you are wandering in the area and stumble across an Indian restaurant, it is not always easy to determine which are offering the highest quality cuisine. Décor is not always the best clue - some of the best food can be served in the modest surroundings. It is worth straying slightly off the beaten track and looking out for places that have drawn a crowd in spite of their more obscure location.

In the listings below you will find a wide variety of Indian restaurant options. Some focus on offering something fresh and new with Indian cuisine (such as Chowki, Imli and Masala Zone), others are traditional and affordable (such as Indian Brasserie and The Golden Oven), others offer a sense of occasion (like Veeraswamy). Have a look at the different options and head to the one that ticks the most boxes for you. 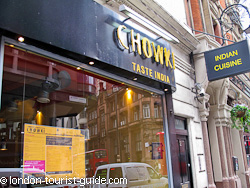 Chowki is a modern Indian restaurant that sits less than one minute's walk from Piccadilly Circus. They offer a modern take on Indian cuisine, changing their menus on a regular basis to suit the seasons and to reflect different regions of India. It is an ideal place to head to learn more about Indian cuisine, as the menu tells you where each dish that you are ordering originates from.

Chowki often offer special deals, so if you are planning on heading there it is worth checking the website (link above) before your trip to see whether you can save any money during your visit.

Veeraswamy is the oldest Indian restaurant in the whole of the UK - it first opened its doors in 1926. This is a place to head to if you are looking for a sense of occasion. It sits on the regal Regent Street, less than five minutes' walk from Piccadilly Circus. The interior is lavish, with a silver ceiling, multi coloured lights throughout and dramatic chandeliers dotted around the venue. The food is prepared using freshly ground spices by expert chefs.

Indian restaurants in nearby Soho

You can walk to Soho from Piccadilly Circus in under ten minutes. Soho is absolutely jam packed with a number of places to eat, a lot of which are Indian. If you don't mind making that little extra effort, you can head to Soho and find yourself in a world of delightful eateries.

It is worth noting that, throughout Soho you will find a whole variety of restaurants offering food from around the world. Some of these are fusion restaurants that will have Indian influences. Others offer cuisines from different areas in Asia. To find out more about all of the options that are available to you in Soho, see our Guide to Eating Out in Soho

Eating out in London can offer you the opportunity to try cuisines and flavours that you may have never experienced before. Even if you have enjoyed a curry every Friday for as long as you remember, it is possible that are dishes and styles that you have not yet tried. Take a look at the options above and there is sure to be an Indian restaurant that takes your fancy.