TGI Fridays has become a symbol of all things American and all things fun. The closest branch of the hamburger and ribs joint sits right next to Piccadilly Circus, on the way to Leicester Square. TGI Fridays is a good place to bring the kids - the staff are enthusiastic and chirpy, the walls are covered in movie memorabilia, and the atmosphere is laid back. There should also be something on the menu to suit the whole family - you will find steaks, hamburgers, ribs, salads and desserts like great big ice cream sundaes. Fun for all the family. 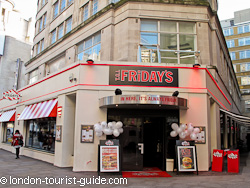 Telephone bookings: You can book over the phone using the number above.

Online bookings: You can book online by using the

E-mail bookings: It is not possible to send an e-mail to TGI Fridays. This means that if you want to book using the internet you will need to use the online booking form - see above.

Walk-in bookings: You should not have too much difficulty getting a walk-in table at TGI Fridays - they are a big restaurant with long opening hours. However, if you are bringing the kids and would like to avoid disappointment it is worth calling earlier in the day (particularly on Fridays and Saturdays) to ensure that you get a table. This is also the case if you are coming with a big group.