If you are bringing the kids for a day out in London, you know there's one place where they'd like to head for lunch or dinner - TGI Fridays. This American diner-style restaurant offers everything that the kids will love - playful waiting staff, humungous burgers and ice cream sundaes for dessert! The TGI Fridays in Covent Garden is centrally located and is bust day or night every day of the week. The décor in TGI Fridays is typically American - there is Hollywood film memorabilia on the walls and red and white striped table cloths. 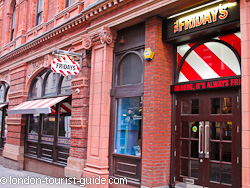