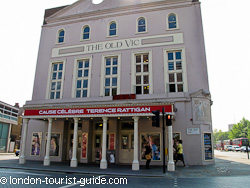 The Old Vic Theatre
The Old Vic building stands alone on the corner of Waterloo's leafy street - The Cut, its tall grey façade and Roman-style pillars overlooking the area. Twinkling light bulbs are dotted around the sign for your play of choice, giving your evening a sense of glamour and excitement. As you enter the theatre itself, you will find yourself in a luxurious world of red velvet seats, gold-gilded balconies and an ornate painted ceiling. As you take your seat, take a second to think about the heavy-weight actors who have trodden the Old Vic's boards - everyone from Laurence Olivier to Dame Judy Dench to Kevin Spacey.

Here on this page we'll give you an overview on what makes the Old Vic special. You will also find out how to get to the Old Vic Theatre along with essential contact details (address, telephone number and official website). We have also provided advice on buying tickets and how to find out about what plays are showing at the Old Vic Theatre.

The Old Vic is a relatively large-sized theatre space (capacity 1067 people) that tends towards staging more classic plays (in comparison to theatres like Young Vic or National Theatre). The Old Vic theatre attracts a high calibre of actor to tread its boards. The likes of Laurence Olivier, Dame Judy Dench, Maggie Smith and Peter O'Toole have performed there in the past.

Hollywood actor Kevin Spacey is the artistic director of the Old Vic, attracting a new kind of crowd to the Young Vic - people who may previously not have been interested in theatre.

It is an 'Off West End' theatre (rather than a West End theatre). We'll use the term " off West End" frequently in this article to describe the Old Vic, therefore, to be sure you know what we mean here is the definition of this term: 'Off West End' is a classic term used in the theatre world. Not only does it categorise theatres geographically (the West End is an area in the centre of London that is home to a large concentration of theatres), it also has certain connotations. West End shows are often considered to be more populist - a lot of them are musicals, and they tend to appeal to a wider audience who may not necessarily be regulars to the theatre. Off West End shows are sometimes considered to be more high-brow, - the scripts are intelligent and complex, and the themes can be challenging. Off West End shows are often classic productions or plays by up and coming directors, and they tend to be plays rather than musicals. Off West End theatres tend to have a higher turnover of productions (a show in the West End could play at the same theatre for ten years or more) - there will be at least four shows each year. They also tend to be more likely to show plays than musicals.

The theatre was founded in 1818 by James King and Daniel Dunn, who were stalwarts of the theatre world and former managers of the Surrey Theatre. They managed to secure funding for the theatre from Princess Charlotte and Prince Theobold. When it first opened it as called the Royal Coburg Theatre. In 1824 the legendary actor Edmund Kean came to play six Shakespeare plays in six nights. Kean addressed the audience during his curtain call saying " I have never acted to such a set of ignorant, unmitigated brutes as I see before me.".

In 1963 the Old Vic became the home of the National Theatre Company under the direction of Sir Laurence Olivier. They moved to their current location in 1976. In 2003 Kevin Spacey was appointed as new artistic director of the Old Vic.

The theatre's bar is called the Pit Bar, and it offers more than the average theatre bar. They have a programme of live music called the Pit Sessions. The bar is popular in the area of Waterloo amongst theatre-goers and social drinkers alike for its vibrant atmosphere and late Operating hours. See the official website link below for the opening times.

How to get theatre tickets

Box Office: You can buy tickets at the venue. The box office is closed on Sundays

Telephone: You can call the Old Vic Theatre and book your tickets over the phone on the number below.

In an attempt to attract a younger crowd the theatre has started a programme called the 'Addittya Mahal tickets'. These are 12 pound tickets for the plays for anyone who is under the age of 25. There are 100 of these available for each show. Check the official website link below for how to get these tickets.

The Operating hours of the Old Vic Theatre vary depending on what plays are showing and the length of the play. For opening times of the booking office, see above. If you would like to find out the opening times during your visit, check the official website (link below).

On exiting Waterloo tube station you will find yourself in the main Waterloo train station building (to find out more about the train station, see our Guide to Waterloo Train Station in London). Once you are in the main station building, head towards the large Marks and Spencer's shop. There is a station exit to the right of the Marks and Spencer's shop. Head down the escalator that leads you out of the station building. You will come out at the large Waterloo Road. Cross the road and head to your right. In less than one minute you will reach a street called The Cut on your left. The Old Vic theatre will be directly in front of you.

Restaurants in the area 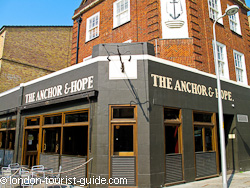 The Anchor and Hope Gastropub near the Old Vic

The Old Vic theatre sits on a street called The Cut. The Cut is a quaint and tree lined little street that offers a large amount of eating options. Along the street you will find independent and interesting eateries where you can enjoy anything from fresh seafood, to well-made pub grub, to Turkish treats. If you fancy some hearty English fayre, including sharing dishes such as whole joints of roast meat, try out The Anchor and Hope in Waterloo.

If you fancy some market fresh seafood that is cooked with simplicity in unique surroundings, try out Livebait Restaurant.

The street that sits directly opposite The Cut is called Lower Marsh. This area is also known for its bars and restaurants. For somewhere a little bit lively, try out Cubana Latin Bar and Restaurant.

At The Cut you are at the heart of Waterloo and in easy walking distance of the majority of its restaurants. You will find Indian restaurants, pizzerias and other options. To find out more about Waterloo's dining options, see our Guide to Restaurants in Waterloo.

It is also worth remembering that at the Old Vic you can walk to the Southbank area in about five minutes. Once you arrive at the Southbank you will find a large concentration of eating options. There are the likes of Canteen Restaurant, Strada Restaurant, Ping Pong and Giraffe Restaurant.

Unfortunately, the Old Vic Theatre does not have its own car park - driving to the theatre could prove difficult. However, if you do need to drive to the theatre rather than use public transport (see above for details on getting to the theatre from the tube station), you could head to one of the car parks at the Southbank. For more information on the parking options, see the Southbank Official Website Car Park page.

The Old Vic Theatre has served London with some world-class theatre for over one hundred years. On your visit to the capital it is worth considering coming to the theatre to see a show and lap up a real taste of English culture.