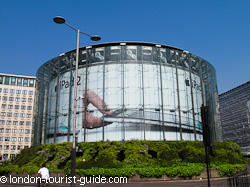 IMAX cinema in Waterloo
You may have seen the Waterloo IMAX during your trip already and not realised what it was - it does not look like your normal multiplex cinema. The cylindrical glass building sits at the heart of a busy roundabout next to Waterloo station, rising from its centre like a futuristic space ship. To get to the cinema entrance, you will need to head down a tunnel outside the station door, away from the noise of the traffic, emerging at the glass sliding doors that lead you to the foyer area. You will step into a cosy world of fluffy red carpets, twinkly spotlights that are dotted across the ceiling and the distinctive smell of buttery popcorn. Enter the cinema itself and find yourself confronted by a screen that is 20 metres high and 26 metres wide. The screen wraps around the front of the cinema and stretches from the floor to the ceiling of the room - making for an all-encompassing experience. Here you will find advice on what to expect at the cinema, links to ticketing, a guide to how to get to the cinema from the closest tube and contact details.

A specialist cinema owned by the BFI (British Film Institute). There is one screen in the cinema. However, it is 20 metres high and 26 metres wide. There is a capacity for 500 people in the cinema. The cinema often screens 3D films, offering an all-consuming experience as you see the film in 3D, on a 540 metre squared screen with a 12,000 Watt digital surround sound system. The cinema screen is larger than any cinema screen you are likely to have watched a film on before. It is so high that you will need to take an elevator to get to your seat in the cinema if you have one of the seats towards the back of the auditorium!

The cinema does not tend to screen the sort of current blockbuster films you will find in normal multiplexes. It shows anything from wildlife films to all-night Lord of the Rings marathons.

The BFI IMAX first opened in May 1999. It was designed by architect Brian Avery. In designing the building, he had to take into account the fact that the screen sits at the centre of a roundabout and has an underground line running four metres below it. For this reason, the structure sits on anti-vibration bearings.

Sometimes the BFI IMAX will feature an opera that is being performed in one of London's opera venues - something for the grown-ups. It is an opportunity to see operas that are showing at opera houses such as the Met for a fraction of the price that the live ticket would cost. For more information on this, it is best to check the official website - link below.

There are two options of places to eat and drink whilst you are at the BFI IMAX - there is a café on the ground floor and a bar on the first floor. The café offers the opportunity to sit and grab a bite to eat or a soft drink before or after the performance. It is also where you can pick up your snacks to eat whilst you watch your film - popcorn, sweets and all of the usual favourites. The bar on the first floor is a sociable space to get alcoholic drinks and snacks (such as crisps, nuts and olives). It has tables and chairs or sofas to sit on. There is also a small outdoor terrace area where you can bring your drinks and enjoy the sunshine (if there is any!).

It is a good idea to decide on whether you will want any snacks before the film starts. The steep nature of the seating and the necessity of a lift make it harder to get in and out of the auditorium. Also, during the evening performance, once the film has started the snack shop closes.

When you arrive at Waterloo underground station you will need to head to the main station exit. As you leave the Waterloo tube station exit you will be able to see the BFI IMAX building directly in front of you (you will not be able to miss its distinctive cylindrical shape). Simply cross the main roundabout road and head to the BFI IMAX entrance.

It is worth bearing in mind that the IMAX cinema is not a run of the mill cinema. If you are looking for a less dramatic cinema experience you will find the BFI Southbank in easy walking distance of the IMAX. The BFI Southbank is also not a normal blockbuster style cinema; it is an art house cinema. It is a place to head to see old films, film seasons from specific actors or directors or new and interesting films. For more information, see the Official BFI Southbank website.

To book your cinema tickets, you can:

Box Office: buy them at the venue (the ticket desk opens every day and stays open until fifteen minutes after the start of the final film screening of the day)

Telephone: book them over the telephone (see booking line number below)

Online: book them online (see the link below)

Cinema prices can be different depending on what screening you are going to see, your age and what time and day of the week you are visiting the cinema. It is worth checking whether you have the option of any special deals during your visit. To find out more, check the special prices page on the official website - link below.

The BFI IMAX cinema offers the opportunity to see normal and 3D film screenings on 20 metre high and 26 metres widescreen. The film programme is ever-changing and interesting, so it is worth checking whether there is something showing that peaks your interest during your visit. The BFI Imax is just one of many cultural places that you can head to on the Southbank (it is close to places including the Tate Modern Art museum, the National Theatre and the Southbank centre), so it can form a part of a day out in the area.