One of Leicester Square's key features are its huge cinemas. Dotted around the square, you will find a grand total of three cinemas, with more in the surrounding area. They are arguably London's most well-known and important cinemas, showcasing many of the UK premieres for big blockbuster films. If it is your first time in a London cinema you will be impressed by the size of the auditoriums - the screens are huge, and the cinemas can sometimes seat up to 1700 people. But do remember that ticket prices reflect the impressive facilities - entrance generally costs more than in a normal cinema (see below for more information on prices).

Leicester Square has three main cinemas - the Odeon, Vue and Empire. Here you will find listings for each cinema with links to the official websites so that you can find out what films are showing and at what times during your visit. 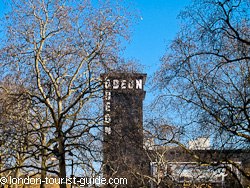 The Odeon in Leicester Square has a total of six screens. The largest screen has seating for 1683 people.

For details on the different ticket options and the prices of the tickets check the Leicester Square Odeon Official Website. 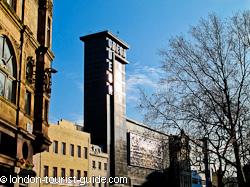 Odeon Cinema in the sunshine in Leicester Square 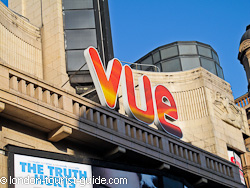 The Vue in Leicester Square has nine screens, one of which is a 3D screen. The largest screen space in this cinema holds 414 people, so it does not have the wow factor of seeing a film on the large screen in the Odeon (see above). However it does have a larger number of screens allowing for a greater variety of film options. 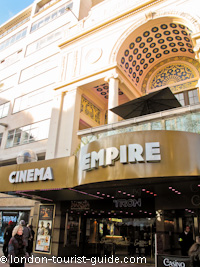 The Empire Cinema in Leicester Square has a grand total of nine screens.

How do I find out about premieres?

The cinemas in Leicester Square are famous for the premieres that take place there on a regular basis. Of course to actually get a ticket to attend the premiere and see the film you will have had to have been invited. If you are not Brad Pitt or Angelina Jolie, you will need to be a film industry insider. Alternatively, it may be possible to enter competitions to win tickets, but this is something that you will simply need to look and listen out for close to the time of the premiere.

However, fans of film and film stars often enjoy attending the premieres to catch a glance of one of their favourite stars and maybe even get a photo or an autograph. On the nights of premieres, you will see large groups of fans standing on either side of the red carpet with banners and cameras awaiting the arrival of the celebrities. The bigger the star, the larger the crowd. People have been said to wait for up to 27 hours to spot Angelina Jolie arriving for a premiere.

To find out if there is a premiere taking place during your visit you will need to keep an eye on the websites of each cinema for more information (see the links above).

You may want to combine your trip to the cinema with a meal. Leicester Square is packed with options for eating out. If you want to grab a quick bite from a fast-food chain, you will find what you need. Alternatively, if you would like to enjoy a long sit down dinner, you will also find lots of options. For listings of the eating options in Leicester Square, including photos, addresses and opening times see our Guide to Eating Out in Leicester Square.

Leicester Square is an exciting place to head to the cinema. You can make a visit there specifically to see a film or a premiere. Alternatively, you can factor it into a day of entertainment in the area. Once you are in Leicester Square, you are surrounded by places to eat, bars, clubs, museums and other attractions. Have a look at the programmes of Leicester Square's huge cinemas and see whether there is a film on that you can enjoy during a trip into the centre of London.