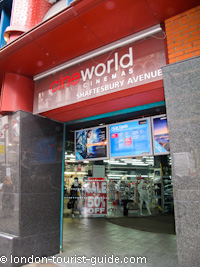 Cineworld near Piccadilly Circus
Piccadilly Circus is one of the best areas to head to in the whole of London to visit the cinema. In a small vicinity, you will find a whole host of cinemas both large and small, art-house and mainstream. It is also worth noting that Piccadilly Circus sits less than two minutes' walk from Leicester Square - home to some of the largest cinemas in Britain (and, of course, to the famous and celebrity-filled film premieres).

This page will provide you with a full guide to the cinemas in Piccadilly Circus. You will find links to detailed pages on the Odeon, Apollo and Cineworld in Piccadilly Circus. Each page will let you know about the location, contact details, booking information, and what to expect at each cinema. You will also find some advice on where to head to if you cannot choose between the cinemas - information on how the cinemas differ and what to expect at each one.

Piccadilly Circus has three main cinemas - the Odeon, Apollo and Cineworld. These can be found dotted around on small streets just off Piccadilly Circus. These are the closest, but it is important to remember that just a few minutes' walk from the square you have even more options (see below for more details).

In terms of price, city centre cinemas can sometimes be slightly more expensive than average cinema prices. If you would like to avoid extra costs, it is worth checking the individual websites of the cinemas to see if they offer any special deals, e.g. group tickets or certain days and times when tickets are cheaper.

For the extra price, London city centre cinemas often offer that little bit extra. This might be a plush bar to have a drink in before or after the film. Or perhaps it is extra comfy reclining seating in the cinema. Or perhaps it is an extra-large screen to watch your favourite films on. To find out the individual characteristics of each cinema, see below.

If you would prefer some more art-house cinema options, do not fear. The Soho Curzon Cinema sits less than five minutes' walk from Piccadilly Circus. This is one of the famous art house cinemas in the whole of London. Not only does it offer the latest international films, it also holds events for film fans, including talks from actors and directors. For details, see our Guide to the Curzon Cinema in Soho.

The Apollo cinema sits on Lower Regent Street, about one minute walk from the Piccadilly Circus tube station. It offers a little taste of cinema luxury. The cinema building includes a bar area where you can enjoy an alcoholic or non-alcoholic drink before or after the screening. Also, you will have the option of paying a little extra for some luxury extra-comfy and reclining seating. For details, see our Guide to the Apollo Cinema in Piccadilly Circus.

Cineworld is a large cinema offering screenings of big blockbuster movies. It has the option of watching 3D films. It also offers the option of going for a 'deluxe' ticket. With this ticket, you will be offered extra comfy seating and also 'seat service' - during the film you can keep the drinks and popcorn coming. The cinema sits less than one minutes' walk from Piccadilly Circus. For details, see our Guide to Cineworld Cinema in Piccadilly Circus.

How do I find out about premieres in Piccadilly Circus?

Whilst organising a night out to the cinema you may also want to schedule in a meal in a restaurant, café or fast food joint. Piccadilly Circus offers a great deal of options for eating out. There are pizza and hamburger joints for the kids, affordable and exotic options if you are on a budget and high-end eateries if you are after something special. For listings of the restaurant options in Piccadilly Circus, including photos, addresses and opening times see our Guide to Eating Out in Piccadilly Circus.

During a trip to London sometimes the cinema is a good option. The large cinemas in the city centre lend the activity a sense of occasion. And sometimes, when you're all shopped out, and you've seen all of the landmarks that you can handle, the cinema is just what you fancy. Take a look at the cinema options above and also those in the surrounding area and choose the one that best suits you.