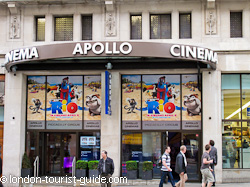 Apollo Cinema near Piccadilly Circus
Apollo Cinema is a cinema that offers a little something extra - an excellent bar area and extra comfy cinema seating. It is a reasonably small cinema that sits on Lower Regent Street - one of the largest streets that stems from Piccadilly Circus. Lower Regent Street is a relatively regal street that heads down to affluent areas such as Pall Mall - the atmosphere and aesthetic of the cinema reflects this.

This page will give you an overview of what to expect from the Apollo cinema in Piccadilly Circus. Find out how to buy ticket and contact details.

What to expect at the cinema

Apollo cinemas are a small chain of cinemas that can be found around the UK. The Apollo cinema off Piccadilly Circus is relatively small in comparison to some of the other cinemas in the area. This makes it an intimate option if you are interested in a more cosy cinema atmosphere. With just five screens, Apollo cinema will have less film options. However, to make up for this, you can enjoy the slick modern aesthetic of the cinema and the extra touches. Apollo cinema has full-sized reclining seating throughout the auditorium. It also has a bar (see more below) and all of the screens are fully licensed, ensuring that you can enjoy a glass of wine whilst you are watching the film.

It's worth remembering that when you are in Piccadilly Circus, you are less than five minutes' walk from Leicester Square - a location that has some famous cinemas. If you fancy watching movies on big screens in auditoriums or possibly checking out Hollywood stars arriving for a movie premiere, this is the place to head. For full advice, see our Guide to Leicester Square Cinemas.

Eating and drinking at the cinema

There is both a bar and a snack section at the Apollo cinema. You can enjoy drinks in a relaxing bar area before or after the film - the bar has shiny marbled floors, red leather high chairs and blue lighting. In the same area you can pick up some film snacks to munch on during the show - everything from popcorn to sweets and soft drinks.

The times of the films and also the opening times of the cinema vary. To find out about film times it is best to keep an eye on the official Apollo Piccadilly Circus website (see the link below).

To book your cinema tickets, you can:

buy them at the venue,

book them online (see the link below)

The price of your ticket may vary depending on whether you are entitled to any concessions. They also vary depending on what time of day you head to the cinema and what day of the week. For details see the official website - link below. Official Apollo Piccadilly Circus ticket purchase page.

If you are looking for more of an art house film, don't forget that the famous Curzon Cinema on the edge of Soho is just around the corner - under ten minutes from Piccadilly Circus. The Curzon Soho is a popular cinemas in London for modern and more obscure films and events that you might not find in the more mainstream cinemas. To find out more about the Curzon, see our Guide to the Soho Curzon Cinema.

Sometimes when you have had a day of sight-seeing, shopping or work, there's nothing that appeals more than to sit in a dark and quiet room and enjoy a good film. Apollo cinema offers this opportunity- you can enjoy a gin and tonic, recline on the comfy chairs and discuss your thoughts on the film in a relaxed bar once you're done. This is a popular cinema so buy your tickets in advance if you can, to avoid any chance of disappointment.