Leicester Square is a good place to head any night of the week for some fun on the town. It is crammed with clubs, bars and places to eat. So you can have a night out without ever having to leave the square! Clubs in Leicester Square tend to attract a mixed crowd of young and old, locals and visitors. There are enough options to ensure that there is a variety to suit a range of tastes.

On this page you will find listings for nightclubs in and around Leicester Square. You will find a short description, the address, telephone number and official website for each nightclub. You will also find a link to a page where you can find out about club-bars, plus tips on finding karaoke clubs and comedy clubs in Leicester Square. 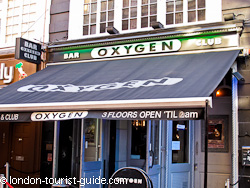 Clubs in Leicester Square come in all shapes and sizes. If you want a full-on multi-floored clubbing experience, you should head to places like Sound, Storm and Oxygen. However, if you would like a drink and a boogie you can go to one of the smaller venues that are a cross between a club and a bar - options include Zoo and Yates. If you fancy yourself as a bit of a crooner, Karaoke Box is one of the popular karaoke clubs to head to. If you are not interested in dancing or singing, maybe it's actually a comedy club that you are after, If this is the case, 99 Club and The Comedy Store are some of your best options.

Sound Club in Leicester Square is one of the city's well-known large clubs. It offers three floors, including VIP areas, where you can reserve a table. The club is open every7 night of the week, offering a different musical experience depending on what night you go.

Metra Club is a more intimate clubbing option in Leicester Square. It also offers a slightly more low key décor than some of the other clubs - there is a 1930's style in the crystal chandeliers and leather sofas. It is open seven nights a week and is often the place for VIP parties after premieres in Leicester Square cinemas.

Oxygen Night club in Leicester Square, is both a bar and a club. It is a large space that spans over three floors, offering bar areas as well as dance floors.

Many of the clubs in Leicester Square would also describe themselves as bars. These are spaces where it is possible to come in the early evening. You will be able to sit down, enjoy some drinks and perhaps some food in a relaxed environment. As the night moves on, the space becomes more like a club - the music will be turned up and revelers will hit the dance floor. Oxygen Bar is an example of a club-bar. Other examples include Yates, Café de Paris and Zoo.

If you and your friend area around Leicester square you might be on the lookout for a karaoke bar. You can keep an eye out on the websites of the clubs above, as some of them might offer a karaoke night in their schedule. Alternatively you can head to a venue that specialises in karaoke. Here you and your friends can hire out your own room where you can sing and dance to your hearts' contact with nobody else watching. An example of one of these is Karaoke Box.

Karaoke Box is not directly in Leicester Square; however it is in the area.

There are an abundance of comedy clubs in and around Leicester Square. Many of these take place during the early evening in club spaces in the centre. Two of the popular clubs are The Comedy Store and The 99 Comedy Club. To find out what comedians will be playing during your visit, have a look at their official websites (provided below).

Going clubbing in Leicester Square offers you the chance to get involved in the nightlife of Leicester Square's city centre. There an abundance of options in the area, so it is worth having a look at the programmes for the different nightclubs that you are interested in heading to. Choose the place playing the music that you like to listen to in an environment that suits you and your friends. If you're not interested in all night dancing, maybe you should try one of the popular comedy clubs or karaoke bars in the area.

Soho ClubsOverview to Clubs in Soho Club 49 in Soho