Soho is an essential London destination for a night out. You may be in the area post-shopping or sightseeing and fancy a drink. Or perhaps you'd like a big night out in London's city centre. For your socialising needs, Soho has what you are after. When it comes to cocktail bars, Soho has some top-class options. And practically every street in Soho has its own traditional British pub.

Here are descriptions of the sorts of options that are available to you depending on what kind of night out you fancy;links to individual pages with descriptions of some of the popular bars and pubs in Soho - ach listing links to a page with location, contact details, what to expect and photos of each bar.

The bars have been categorised by what kind of bar they are: a traditional English pub, a cocktail bar, a club bar or a karaoke bar.

If you would like to carry on your night out by hitting a club after the bars, you will find a whole range of options in Soho. Check out our Guide to Clubs in Soho for details on some of Soho's popular clubs.

What to expect from the bars in Soho 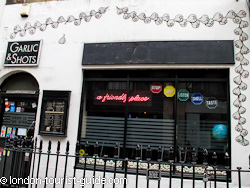 Due to the fact that the area is full of people working in creative industries such as media, film and architecture there is a vibrant after-work atmosphere in the area. Each night of the week (particularly on Thursdays and Fridays) from about 18.00 onwards you will see people spilling into the streets, standing outside bars and pubs in the area.

From this time onwards, the party atmosphere continues. As the night moves on, there are copious options for cocktail bars and clubs with dance floors in the area. Soho is reasonably small, with the majority of streets crammed with drinking options. Parts of Soho even feel partly pedestrianised, as party people chat outside bars and wander between the night owl options.

Streets including Old Compton Street, Brewer Street and the smaller streets that branch off of them have a reputation for having some of the best gay bars and clubs in the area. Many of these bars will also welcome a straight crowd - if you are unsure of which places have a more open-door policy, it is best to ask the door staff. 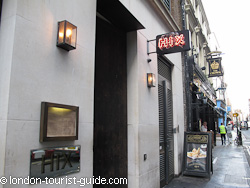 Some of Soho's real gems are not always the easiest to find. Many classy and interesting bars can be found lurking behind discreet doors and in basements throughout the city centre. To make the most of Soho's bar scene, do some research before your night out, ask around and check what the membership policies of the bars are (if it is a members bar you will not be able to get in unless you are a member yourself or with a member).

Soho boasts a plethora of high quality restaurants in the whole of London. If you fancy getting some food, either before or after your drinks check our information on the eating options: Guide to Restaurants in Soho 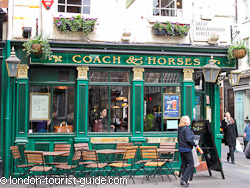 Coach and Horses Pub in Soho

Pubs are a place to head to get a genuine feel for England. You can enjoy some good conversation and friendly banter in surroundings where you will be able to hear yourself think. You will also be able to try traditional British ale. If you head to the pubs during the after work hours of about 18:00 - 21:00 you will find them packed with after work drinkers. This is a lively place if you fancy a vibrant atmosphere, but remember that you will probably have to stand and will have to join a queue for the bar.

The French House in Soho is known for being the place to drink for people working in the creative industries in Soho. It has a warm and lively atmosphere. It also has a popular upstairs restaurant.

The Coach and Horses was once the home of 'London's Rudest Landlord'! Though he is no longer there, his spirit remains. There is a friendly banter in this pub that is steeped in history. 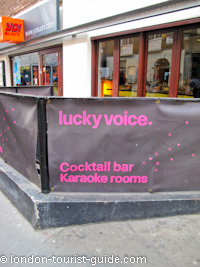 There is a popular phenomenon that is currently taking over Soho - a new take on karaoke bars where you and your friends can have your own room to sing to your hearts' content! Perfect if you are looking for an activity that you can enjoy with a group of friends for a birthday or a stag or hen do.

Lucky Voice in Soho is one of the popular options for a karaoke bar. In each room you will be offered your own waitress service, so the drink never needs to run dry as you are singing the entire Michael Jackson back-catalogue!

Hix Bar (Mark's Bar) in Covent Garden is situated inside a famous Soho's restaurants and it an example of old school New York glamour mixed with a quintessential Englishness. If you head there, make sure to try some of their legendary bar snacks.

Floridita in Soho is a glamorous bar. It is a Cuban themed club and cocktail bar that is situated over two floors. Head here for music and dancing to accompany your cocktails.

As the night continues in Soho, you may find that you fancy turning up the tempo and hitting the dance floor. Some of the bars in Soho stay open that little bit later, offering DJs and a dance floor so that you can take to the floor. These are a money-saving option if you don't want to pay to get into a club but are not quite ready to go home. Digress Bar (now called Gem Bar) in Soho offers DJs every night of the week and a glamorous setting that will take you seamlessly from early evening drinks to late-night dancing.

Soho does have something for all ages, tastes and sexual persuasions. It is a relatively small area that is crammed with bar options, making it a compact area to choose for a pub crawl. This part of town is vibrant all week long, so you don't need to wait until the weekend to have a fun night out- bars will be nearly as vibrant on a Monday as they are on a Saturday. So do some research ahead of your night out to find the options that best suit you. And have fun!