Piccadilly Circus square is dotted with bars and clubs. However, the majority of bars that you will find will be in the surrounding areas. Within easy walking distance of Piccadilly Circus, you will find bars to suit a number of moods and occasions. If you fancy a quiet drink, you will find old-school British pubs or sophisticated wine bars. If you are after an eventful and high-energy night out, the area offers a selection of late-night cocktail bars and club-bars where you will have the option of dancing until the early hours.

Hereyou will find advice on what sorts of options are available to you depending on what sort of bar you fancy heading to; listings for some of the popular bars in and around Piccadilly Circus (each listing links to a more detailed page with the location, contact details, what to expect and photos of each bar). The bars have been split into their respective categories, making them easier for you to find: club-bars, sports bars and comedy clubs. You will also find links to areas of London that are easy to reach from Piccadilly Circus.

Once you have hit the bars, maybe you would like to carry on the fun and head to a club. Many of the clubbing options near Piccadilly Circus are actually club-bars (see below for the club-bar options). However, if you would like a guide to the night clubs that you can find in the area, see our Guide to Clubs in Piccadilly Circus

What to expect from the bars in Piccadilly Circus 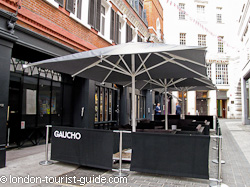 Piccadilly Circus is a large and central hub for tourism - an iconic area of London. The square is a good starting point for a night out - to find most of its nightlife offerings you will need to head to the smaller streets that lead off from it. you and your friends can get dressed up and head out for a glamorous night of drinks and dancing. If you would like to do some more laid-back drinking in slightly more subdued surroundings - head to nearby areas such as Soho or Leicester Square (see below for more information).

In terms of opening hours, the opening times for bars in this area will vary greatly. If you are heading to a standard club or bar, they will tend to close at around midnight. If you go to a cocktail bar or a bar-club (see description below) you will be able to carry on the fun until 03:00 or 04:00.

When considering dress code, it is best to check with the individual bars for their policies. However, in general, there will be no dress code necessary if you go to a pub - you can come in jeans and t-shirt and not feel out of place. If you are opting for one of the cocktail bars or club-bars you will need to dress up slightly more - some may have rules regarding footwear.

Club-bars are a hybrid between a bar and a club. In general, you could either call them a large bar or a small club. They are bars where a DJ will play later on in the evening, and there is room for dancing. If you're not in the mood for a boogie, it is best to head to these bars earlier on in the evening (probably before about 21:00) when you will be able to enjoy a quiet drink.

is a convenient spot if you don't want to stray far from Piccadilly Circus - it is less than one minute's walk from the square. It offers a number of different rooms, with different atmospheres and aesthetics.

Some of the more glamorous restaurants in the area contain their own bars and clubs. If you are coming to town with a large group, you can enjoy dinner, drinks and dancing in one place, without having to worry about the logistics of getting around. Check out our detailed pages on restaurants such as Gaucho Grill

When you've headed into London for the day or the night, sometimes there'll be a match on that you just can't miss. A sports bar right next to Piccadilly Circus ensures that you won't have to make too much of a detour from your tourist trip to see the game. Rileys sports bar Piccadilly Circus

If you are planning a night out in the centre of London with a large group, a comedy club offers an enjoyable and convenient option. Not only does comedy seem to appeal to everybody, it also means that you can gather the whole group in one place for a whole evening's entertainment. To find out more about the comedy club options in Piccadilly Circus, see our Guide to Piccadilly Circus Comedy Store

Areas close to Piccadilly Circus with a selection of bars

Piccadilly Circus is actually a small part of London. This means that once you are there, it is worth exploring the surrounding areas to unearth a wealth of pub and bar options. Here are some ideas for other parts of London where you can go drinking: Soho bars

In Soho you will find a selection of some of London's coolest bars. You can reach Soho from Piccadilly Circus in five minutes walking. Head to Soho for authentic and traditional British pubs. It also has a large gay community, ensuring that there is a large selection of gay bars. Leicester Square Bars

Leicester Square offers a good selection of bars if you would like a lively night out. It is the home to lots of cocktail bars and club-bars. It also offers cheaper drinking options - Leicester square is home to both a Weatherspoons and a Yates Wine Lodge (two-chain bars famed for offering affordable drinks).

Piccadilly Circus lies right in the very heart of London and offers a great deal of places to head for a drink in the surrounding area. If you are planning a big night out with your friends, do some prior research to find the options that best suit you. Whether you would like a sophisticated cocktail, a quiet pint or a big night out, you will find what you are after in easy walking distance of Piccadilly Circus.