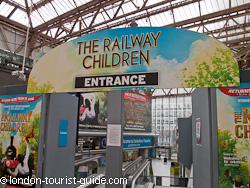 The Railway Children
The Railway Children producers have done everything within their powers to offer their audience a completely immersive experience. You will arrive at the theatre through the majestic stone victory arch of Waterloo train station - a large arch flanked by elaborate sculptures. Step away from the noise of the traffic and the stresses of the city into a simpler era. Waterloo station's building transports you back to the 19th century, with its traditional four-faced station clock hanging from the station's tall steel and glass roof. And this is before you enter the theatre itself! You will be seated on the station platforms that were once used for the Eurostar train. The play's action takes place around one of the show's stars - a genuine 1870 steam train locomotive, Stirling Single No.1, which will move through the set throughout the show. Allow your sense to be overwhelmed as the train's piercing whistle blows and its steam races past your cheeks.

On this page you'll find some background information on what the play is about, plus details on how to buy tickets, when the play will be showing, where the play takes place and official website links.

Overview to The Railway Children: what makes the show special

Many of us will remember The Railway Children as one of our favourite books as we were growing up. It has now been turned into a stage production in an unusual and imaginative venue - Waterloo train station. The tracks that were once used for the Eurostar were redundant until the concept for the play was dreamt up.

The Railway Children is a theatre show of the classic Edith Nesbitt children's book. The play is set in the realistic surroundings of Waterloo station. You will be seated at either side of the railway tracks that were once home to the Eurostar train. The theatre has a capacity of 1000. One of the stars of the show is the Stirling Single No.1 - a real-life old steam train that was built in 1870 and designed by Patrick Stirling. Throughout the play, the train actually moves in and out of the theatre area, between the two platforms that make up the stage area.

The play is popular amongst children. The theatre organisers suggest that anybody above the age of 2 can come to the show. The play stars child actors (the three main characters in the play are in their early teens - Bobby, Peter and Phyllis, are the stars of the show) and the kids will love the novelty of the moving train that moves throughout the play. This is a play where the kids (anyone from 2 and up) will enjoy it just as much, if not more, than the grown-ups.

The play is in a location that is both apt and novel. What better place to see a play about a railway than in a railway station. As you make your way to the entrance to the theatre past the traditional four-faced station clock hanging from the station's tall steel and glass roof, you will already be immersed in a world of railway.

The Railway Children is a traditionally British story - the children's book by E Nesbitt was first published in 1905 in the London Magazine. Many will know the film of the Railway Children that was made in 1970 and showcases the British countryside. It also stars an old locomotive British steam train (see above for more details).

Tickets for the show

If you would like to book tickets to see the show you can either do this online or over the phone.

Ticket prices can vary, depending on what time you see the performance and where you sit in the theatre.

Performance times vary depending on what time of year you want to see the show and whether you come during the week or at the weekend.

The Railway Children is actually located inside Waterloo train station. For details on the location of the station, plus information on how to get there and what facilities are in the station building, see our Guide to Waterloo Station.

The Railway Children is a literary classic that has been turned into a play with a difference. If you are in London and on the look-out for something a little bit special that will keep the whole family entertained, this might be just what you are after. It has had some complimentary reviews and its success has seen it continue its stay as a feature in Waterloo station. Book your tickets well in advance to avoid disappointment and enjoy the show!