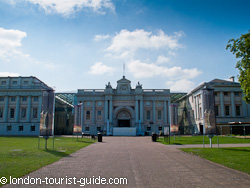 Greenwich National Maritime Museum
As you head from the tube station to the National Maritime Museum you will be in no doubt that you are in an area where people are passionate about the sea and all things maritime. You will pass numerous fish and chip shops and the naval college on your way to a light stone columned building at the end of a walkway flanked with luscious green lawns. As you walk into the lobby of the museum you will be immersed in a maritime world - floor to ceiling windows allow light to stream in and the light bounces off the dimpled mirror ceilings to give an underwater feel. 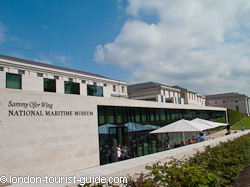 The main entrance to the Greenwich National Maritime Museum

The manageably sized museum houses sea-related artefacts throughout history such as portraits of explorers, navigational instruments and ship models. You will find a large bright area with a mezzanine area, allowing you to look down at the ships parts and lighthouse equipment from above. From this space exhibition rooms shoot off where you can look at sketches, manuscripts and other nautical artefacts in hushed spaces with low lighting, making the artefacts rather than the room the star of the show.

Here there is a guide to what to expect at the museum. Plus exhibitions, tour options, location, how to get there, parking, ticket prices, opening times, places to eat and places to stay. 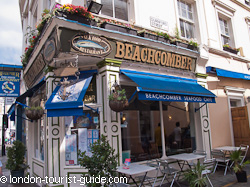 A seafood restaurant near the Maritime Museum

What to expect at the Greenwich National Maritime Museum 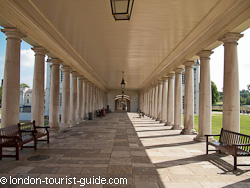 Outside the National Maritime Museum

The National Maritime Museum has one of the the world's largest maritime historical reference libraries. There are 100,000 volumes of books there: manuscripts dedicated to the study of maritime history from the 14th to the 20th century, ship plans, public records of the Royal Navy and Merchant Navy, records of semi-governmental and non-governmental organisations, personal accounts of naval journeys.

The museum has been in existence since 1934. A special act was passed for the creation of the National Maritime Museum: the National Maritime Act of 1934. It was opened thanks to donations from Sir James Caird and King George VI. Throughout history, the area of Greenwich has had associations with the sea. Due to Greenwich Meantime navigators across the world set their clocks according to its time of day. The museum makes up part of the UNESCO Maritime Greenwich World Heritage site, along with the former Royal Naval Hospital and Greenwich Park. These are places where important cultural, maritime and scientific developments were reached. The Museum buildings began life in 1807 as a school for the children of seafarers. 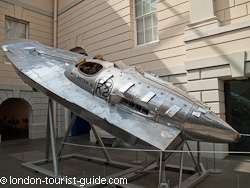 A boat in the National Maritime Museum

The National Maritime Museum opened its new Sammy Ofer Wing in July 2011, which includes a new permanent gallery called Voyagers. There is also a new library and archives, a new temporary exhibition space, a Compass Lounge (a modern space with interactive information about the artefacts), a new café, brasserie and shop. In this wing the artefacts are accompanied by interactive display boards to help you to gain a greater understanding of what they are all about.

On the Official Greenwich Maritime Museum website there is information on the not-to-be-missed objects on display at the museum, such as Nelson's uniform from the Battle of Trafalgar. 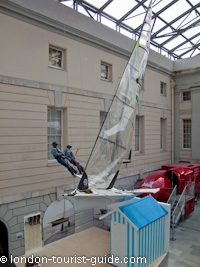 Exhibition area in the museum

Exhibitions at the museum

To find out exactly what exhibitions will be available when you make your visit to the museum, check out the Exhibitions page on the Official Greenwich National Maritime Museum.

How to get there

You can travel to Greenwich from central London by boat (https://www.rmg.co.uk/plan-your-visit/getting-here/river). It's an interesting way to get to the museum and helps you realise how important our maritime history is to London and the UK as a whole.

It is not possible to get the tube directly to Greenwich. You will need to catch either the DLR (Docklands Light Railway) or an overland train to the museum. Depending on what area of London you are heading to Greenwich from, there are different options for getting to the museum. See the table below for your options in relation to what tube stop you will be coming from.

Directions to the museum from Cutty Sark: On leaving the station head right down Greenwich High Road until you reach Romney Road on your left. Walk down Romney Road until you see the maritime museum on your right, opposite the University of Greenwich building. The walk should take you between 6 and 10 minutes.

On arrival at Cutty Sark DLR station you will find signs directing you to the museum outside of the station. However, the signs tend to disappear when you need them! The sign outside the station will direct you to the entrance to the University. When you arrive at the entrance, turn right and keep walking until you arrive at the next sign that will point you on the direction of the museum.

The Greenwich National Maritime Museum is open at the following times:

Admission to the exhibitions at the museum is free at all times.

You can try out the Astronomy café which is located inside the Royal Observatory. It is owned by the same group who own the maritime museum. It sits next to the Planetarium and offers views over Greenwich Park. The café serves hot drinks, soups and snacks.

See above for details as to the location of Greenwich maritime museum and how to get there (there are no tube stops in the area).

If you have a particular interest in maritime the Greenwich National Maritime Museum be like your heaven! The specialism in nautical artefacts at the museum will be right up your street. It is relatively small museum consisting of approximately 15 rooms across two floors - you can look around the whole museum in a couple of hours, without having to choose certain areas of the museum that you might not have time to see.