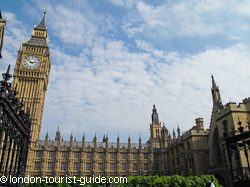 The Houses of Parliament
Exiting Westminster station, you will be in no doubt of the fact that you have arrived at the Houses of Parliament: the home of British politics - there is a specific buzz of energy in the area as you jostle through the crowds of excited tourists and blink at the flashes of BBC news teams. And, of course, you will feel the chilly shadow of Big Ben's looming bell tower, the iconic black and white clock face smiling down at you as you exit the station. As you walk around the straight lines and elaborate roofs of the stone buildings, you will be enveloped in the unmistakable chatter of tourists and professionals alike, discussing the issues of the day. As a blacked-out car heads through the security gates, it's fun to presume that the prime minister's inside!

On this page you will find an overview to what to expect when visiting the houses of parliament, a description of what it is like to visit, how to get tickets and tours, photographs, advice on where to eat close to the buildings, location details, contact details and opening times.

Houses of Parliament overview and what makes it special

When you visit the Houses of Parliament it is important to remember that you are visiting a fully functioning place of work. The Houses of Parliament are open to both locals and visitors from overseas to watch debates and committee meetings that take place in the buildings. If you are more interested in history than in politics, you can also take a guided tour of the area and look at Big Ben from the clock tower nearby. A day out to the Houses of Parliaments can be a jam-packed one, so it is best to get your bearings and do a little planning ahead of your visit (see below for more ideas on what to expect for a trip to the Palace of Westminster).

The Houses of Parliament are the home to the UK's government and a centre for political life. This is far more than just a historical building - it is a functioning institution where politicians make decisions, and the prime minister carries out his daily business.

It is home to the House of Commons: this is where debates are held between politicians and laws are passed. The House of Commons is open to the public, so you can come here to witness politicians in action (see below for more details). It is also home to the House of Lords: also known as the 'Upper House' of the Houses of Parliament. This is where a group of experts in their field who have not been elected democratically aid the government in decision and lawmaking. The Lords are chosen by the Queen on the advice of the Prime Minister.

It is possible to take a tour around the Houses of Parliament - this is the easiest way to gain access to the building. The tours provide a personal touch as there is no audio guide option - you will be taken on a tour of the rooms in the buildings by a professional expert (see below for more details).

The Palace of Westminster experience

Debates and Meetings: It is possible to see real live debates between politicians during your trip to the Houses of Parliament. You will be able to sit in an area called the public gallery and watch issues being discussed and laws being passed. Obviously, some debates are far more popular than others (Prime Minister's Question Time tends to be the popular debate to watch). Therefore you should do some advance planning to find out what you will be able to attend and whether you need tickets (these tickets will be free, but at certain times you will not be able to get in without them). For further details, see the Official Houses of Parliament's website page on attending debates and meetings.

Tours: Perhaps you would be more interested in getting inside the House of Lords and House of Commons buildings that make up the Houses of Parliament. If this is the case, you will have a variety of options for tours of the area. The tour options vary depending on whether you are a UK resident or you are visiting from overseas. Also, it is important to remember that tours will work around the functioning hours of Parliament. This means that it is essential to plan in advance if you would like to go on a tour during your visit.

The tours are available in a variety of languages (French, Spanish, Italian and German). They last approximately 75 minutes (however, in my experience the tour started 15 minutes late and lasted about 100 minutes). During the tour you will be given the opportunity to get deep into the heart of the Parliament buildings - you will see everything from the bench at which the Prime Minister fields questions at Question Time to the seat that the Queen sits on in the House of Lords to the place where politicians go to pick up their post. The tour is an enjoyable mix of amusing anecdotes from Parliament's history and explanations of how the British government system works. If you are not fully clued up on British government, you will still enjoy the information provided and the ornate rooms that you are free to wander through.

If you are taking the tour, there are a few things that it is worth knowing beforehand:

The tour lasts approx. 75 minutes (but it can run over). Throughout the tour, you will not be allowed to sit down. Therefore, if you feel that you might get tired out during the tour, this is something that you should speak to your tour guide about.

There are access issues for wheelchair users during the tour - when you purchase your tickets, let them know if you have any special requirements.

The tours tend to have approximately 25 members of the group. This means that at times it can be reasonably hard to hear your tour guide. If you're at the back and cannot hear, don't be afraid to say so and the guide will be sure to raise his or her voice. Alternatively, ensure that you place yourself as close to your guide as possible (there's no harm in being the teacher's pet in these circumstances!).

To find out more, check out the Official Houses of Parliament's website page on Tours. 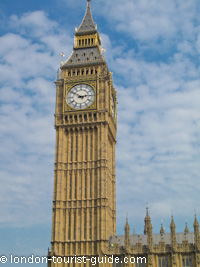 Big Ben: Chances are if there's one place you've heard of in the whole of Westminster, it will be Big Ben. This is the tower that is officially known as the Clock Tower that sits on the banks of the River Thames overlooking the city. You may simply want to look at the tower from outside. If this is the case, you will see the tower directly in front of you when you exit the tube station (see below for more details). However, it is also possible to go up the Big Ben tower as part of a tour. To find out more about the tour times and what to expect, check out the Official Houses of Parliament website Big Ben page.

The History of the Houses of Parliament

The first royal palace was built on this site in the eleventh century. It was the London residence of the Kings of England until 1512 - politicians would often come here to have meetings with the King. In 1512 a fire destroyed the whole complex.

These are the buildings that the legendary Guy Fawkes attempted to burn down in 1604 as part of a conspiracy to overturn the then King, King James, With a team of conspirators, on 05 November he allegedly tunnelled his way into the buildings with gun power. However, an anonymous letter to the King alerted his men to a possible danger. On searching the grounds, they found Fawkes and the gun powder. He was tortured and hung as punishment and a warning to other would-be traitors.

The complex was rebuilt, and the members of Parliament began using the site as the place for their meetings.

There was another fire in 1834 in the re-built complex. There was a competition to choose which architect would design the new Parliamentary buildings. The competition was won by architect Charles Barry. Construction started in 1840 and took thirty years to complete.

Tickets for the Houses of Parliament

In general, you do not need to pay for tickets for the Houses of Parliament. However, it will all depend on when you plan on visiting and what you would like to see while you're there. See above for more details.

The Houses of Parliament is made up of various buildings. Therefore, once you decide on where you would like to head, see the official website (link below) to get the address.

Tel: There is no general number that you can call for the Houses of Parliament

Palace of Westminster's closest tube stop is Westminster. On exiting the tube station you will see the Houses of Parliament directly in front of you.

Many of the traditional pubs in the streets surrounding the Houses of Parliament offer good quality food at affordable prices. To find out more about the pubs in Westminster, check out our Guide to Bars in Westminster.

You will find a commercial car park near Victoria Tower and there is also disabled parking available in the area.

To find out exact details about parking options during your visit to the Cathedral, check out the Official Website for Nearby Parking.

The Houses of Parliament are a UK institution. During your visit to London they are an essential part of a complete trip. If you are a fan of politics this is a dream destination - you can watch live debates taking place and can stroll through the halls that have been trodden by generations of Prime Ministers. If you have an interest in British politics this can be like your celebrity spotting opportunity. Perhaps you'll see the Minister for Education striding through Westminster station (that's what happened to me! )Do some research before you get there to make the most of your visit.