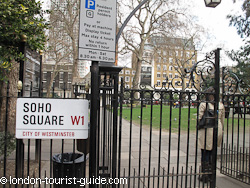 Soho Square in the heart of Soho
Soho is popular in London for the nightlife, shopping, restaurants and bars - you can move seamlessly from a bustling and creative new restaurant to an atmospheric little bar to an all-night club that is packed every night of the week. That doesn't mean that the area is quiet during the day - seven days a week you will find Soho's streets full of workers, shoppers and tourists throughout the day.

This page will give you an overview of what to expect in Soho and advice on how to get there. There are links to detailed pages on eating out, shopping, bars and attractions in Soho including the Curzon cinema and guides to different food types that can be found in the area.

What to expect in Soho and what makes the area special

Soho is an eclectic area where you will find a wide variety of entertainment options. 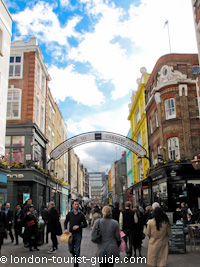 Some of the most popular areas of Soho include the following:

Old Compton Street: Old Compton Street runs right through the heart of Soho. It is where you will find many of Soho's popular gay bars and clubs. It is also home to fine restaurants. The street is not pedestrianised, but it feels as though it is.

Carnaby Street: This is the area that was famed with being at the centre of the fashion scene during the sixties. These days it is slightly more commercial, but it still maintains some of that essence of creativity. It is the place to head to do some shopping in Soho. You will also find that the streets that lead off Carnaby Street are packed with bars and clubs.

Wardour Street: Wardour Street runs from one end of Soho to the other. It will take you right from Leicester Square to China Town, just off Shaftesbury Avenue. 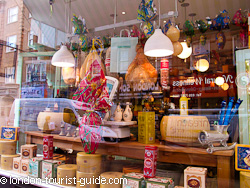 The window of an Italian deli on Brewer Street

Brewer Street: Brewer Street is also part of the Soho gay scene. It is also home to some of the area's upmarket restaurants. This street will take you all of the way to Regent Street.

Frith Street: Frith Street is where you will find "Little Italy" - an area to head to if you are after produce from an authentic Italian deli, a coffee served by an animated Italian or dinner in a little Italian restaurant.

Soho does not have its own tube station. However, there are a variety of tube stations that will bring you closer to it which include:

In general, if you are heading to Soho, it is best to head there using public transport. Parking in the area can be difficult to find. However, if you do need to drive there, you should be able to find some on-street parking.

If you need a car park, you will find a couple of NCP car parks in the area:

For further information on the car parks in Soho, visit the Official NCP Website. 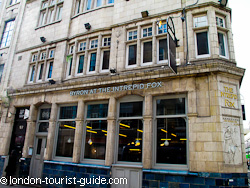 A burger joint in the heart of Soho

Soho is renound in London for quality cuisine. It offers a wide variety of eating options - everything from authentic and cheap sushi to Michelin starred French cuisine.

For a guide to eating out in Soho, including advice on how to find the sort of place that will best suit you see our page on Places to Eat in Soho.

When you are deciding on a meal out in Soho you may not know exactly what options are out there for you. If you know the type of food that you would like to eat, but don't know an exact restaurant that you would like to visit, we have what you need. On our Soho restaurant index page you will find links to pages covering your options for different types of food such as Italian, sushi, Thai, tapas and pizzas. 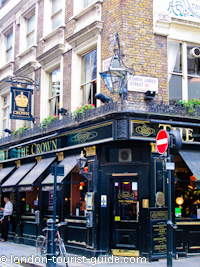 A traditional pub in the centre of Soho

Soho is also famous for its wide selection of quality bars and pubs. Whether you are looking for a traditional old pub, an upmarket cocktail bar or somewhere where you can dance until dawn, you will find what you are after in Soho.

For more information on some of Soho's top bars (including a who, what, where, when and why guide to each bar), plus a general guide to what to expect when you head for a night out in Soho, see our Guide to Soho Bars.

Soho is the place to head to if you are looking to do some shopping with a difference - a lot of the shops that you will find in and around the Soho area are original and independently owned speciality stores. Places such as Carnaby Street, the Newburgh Quarter and Seven Dials are trendy and fashionable places to do some unique shopping.

Soho is popular with those looking to go clubbing. It does not have the big super-clubs that you will find in other parts of town. However, there is a wide selection of smaller clubs. You will find both straight and gay clubs appealing to different musical tastes and clienteles.

For a guide to clubbing in Soho, including advice on what the clubs are like, what to expect when you get there, what time to arrive and individual guides to some of Soho's popular clubs, see our Guide to the Clubs in Soho.

Soho is not the sort of place where people generally come to sightsee. It is not full of palaces, museums or artefacts. But what it offers instead is a genuine insight into London life. The streets of the area are full of all sorts of London characters and the shops, bars and clubs are some of the best in London. Soho also offers one more important attraction - The Curzon art house cinema.

Soho is situated in the centre of London and considered to be the city's beating heart. The area offers a generous helping of character and genuine 'London-ness'. Each bar, restaurant, club and shop adds to the atmosphere of the area due to its individuality. Within minutes you can go from a truly Italian style café to a Japanese noodle bar to a New York-style basement cocktail bar. During your trip to London, make sure that you put aside a good amount of time to get lost in the streets of Soho. Both by day and by night it is full of energy, life and friendly faces.